Partly Raises $1.2m USD in Pre-Seed funding from all star consortium of investors 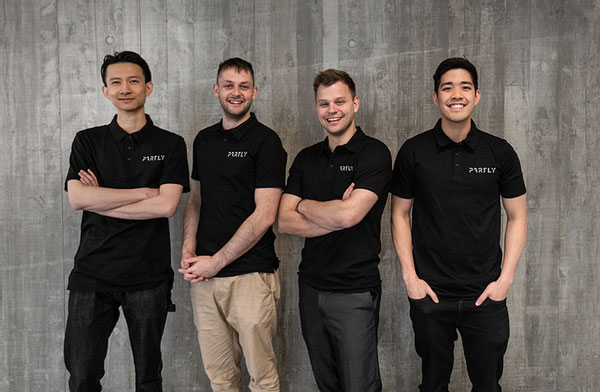 The company has  included an additional 11 angel investors including Rocket Lab Founder Peter Beck and ex-head of eBay Motors UK , Tony Austin. $1.2 million USD Pre-Seed capital has been raised in one of Christchurch's largest seed rounds.

The funds will be used to rapidly scale the startup’s  growth with an estimated 17 roles now ready to fill and a pipeline of customers from over  13 countries around the world.

Partly helps parts businesses unlock billions of parts currently offline and connects them with buyers around the globe. There are more than 85 billion auto parts in the world and few are easily tracked or visible online.  Partly solves this problem. The worldwide automotive parts market is worth $1.9 Trillion annually.

Partly founder and CEO, Levi Fawcett was, until recently, part of the Rocket Lab’s senior engineering team. He and his co-founders, Nathan Taylor and Mark Song,  burst onto the startup scene in 2017 with an online marketplace connecting New Zealand SMEs with customers.  As one of the first teams to enter the Christchurch based startup incubator, Te Ōhaka, Levi was able to access the support he needed to rapidly grow his startup.

Within 18 months, they had more than 50,000 monthly users purchasing from more than 1,000 New Zealand businesses.

But a pattern had started to emerge and it wouldn’t be long before that pattern would drive Levi’s next leap of faith. “We began to notice that automotive businesses in particular struggled to sell online but they couldn’t use standard tools - such as Shopify -  because automotive parts data is so complex.”

To solve this problem, a little over three months ago, Levi’s team launched Partly. Within four weeks of launching, the true global potential of Partly became evident and Levi recognised the need for capital in order to scale the venture to satisfy the extreme demand they were experiencing.  Soon thereafter, Partly confirmed  Australasia’s leading venture capital firm, Blackbird, as the lead, and one of the hottest new arrivals in town, Hillfarrance Ventures as well as Icehouse Ventures as a follow.

Blackbird Partner, Samantha Wong, who led the deal, says, “ The magic of Partly is equal parts team and market. I was impressed by the founders’ sense of urgency, and hunger to deliver an amazing experience for customers, even sleeping overnight in their first customer’s workshop to get them online. This is matched by their hunger to conquer the world right from the beginning from New Zealand, and the juicy network effects that are starting to emerge in the business model.”

Hillfarrance Venture Capital  Managing Partner, Rob Vickery, says, “We love dynamic groups of entrepreneurs who are tackling giant markets that would benefit from a new injection of innovation into their industry. Partly is doing just with the auto parts market and building a platform and data set that will become the gold standard for all members of the value chain. We are honoured and excited to work with Levi, Nathan, Mark and the rest of Team Partly to realise their vision and help them access new international markets.”

Partly has paying customers across 13 countries and is growing fast, with 17 roles now ready to fill within the exciting startup from right here in Christchurch. “We’re excited about making a difference to our local and national economy,” Levi says.